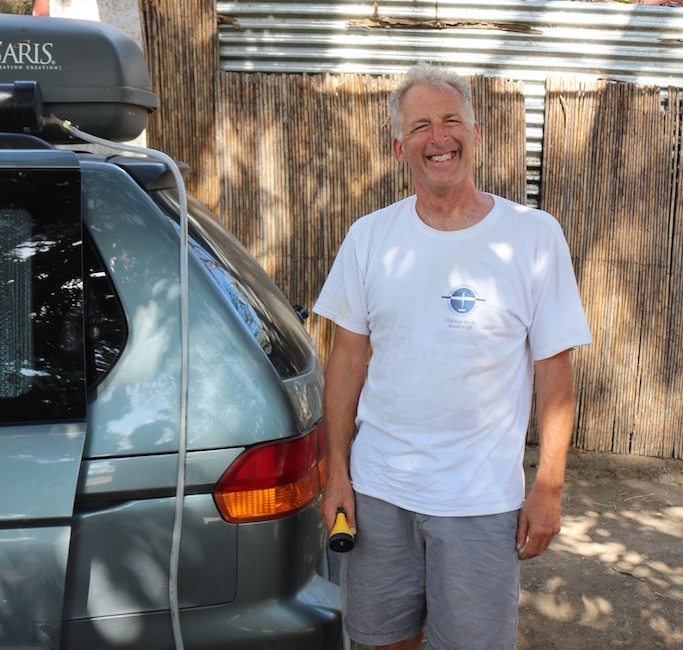 We first met Mark in El Cuco, El Salvador. Mark is a solo traveler from Ottawa, Canada and he came to verify everything of what Canadians are famous for. The last 5 months or so, he is travelling solo from Ontario, Canada to Tierra del Fuego, Patagonia in a Honda Odyssey family van.

Shortly after we introduced each other, we offered him a cold beer but he kindly denied because of a cold. At some stage, he asked how much we had paid for our fridge & if were happy with it. Ego had to answer and we had to justify the 550 Euro value of our little luxury to our new friend. Mark politely replied that he understands the high cost of the fridge. When we asked him what he does about cold drinks and other groceries that need to be cold he just said that he buys ice! We thought that it was the only hit in the balls but Mark had more. The value of his car was only 800 American dollars. So, when he was getting prepared, profoundly he did not buy equipment of similar value of the whole vehicle. He had a few low cost tweaks & tricks that made us think twice about how people choose to travel. Mark is not a long time traveller neither slow BUT he is frugal, minimalist & has that travel wisdom that you get only when you start wandering around.

Sometimes, it is really hard to define what  needs to be cheap & what needs to be just low cost. Our friend & of course us had quite a few dilemmas (is a fridge of 500-1000 Euro really worthwhile, etc.) as well as wrong decisions for several stuff that are related to preparation and outfitting stage.

The only way not to make mistakes, is sitting & doing nothing. At the same time, the best way to know is to leave your couch & hit the road!

33 peoplehave already got TRAVELIVING and have already an idea of what traveliving is about, so they can easily relate Mark’s story with the concept of traveliving.

Once again, thanks a lot for being part of the trip 😉

This site uses Akismet to reduce spam. Learn how your comment data is processed.

Reproduction or use of text and multimedia information (videos, images, etc.) is authorised, provided the source is acknowledged, unless otherwise stated.